Thank you to all who voted for me - Citizen/Volunteer 2020 - West side of Kenosha Pass. I am humbled to receive this recognition and honored to serve those in Park County 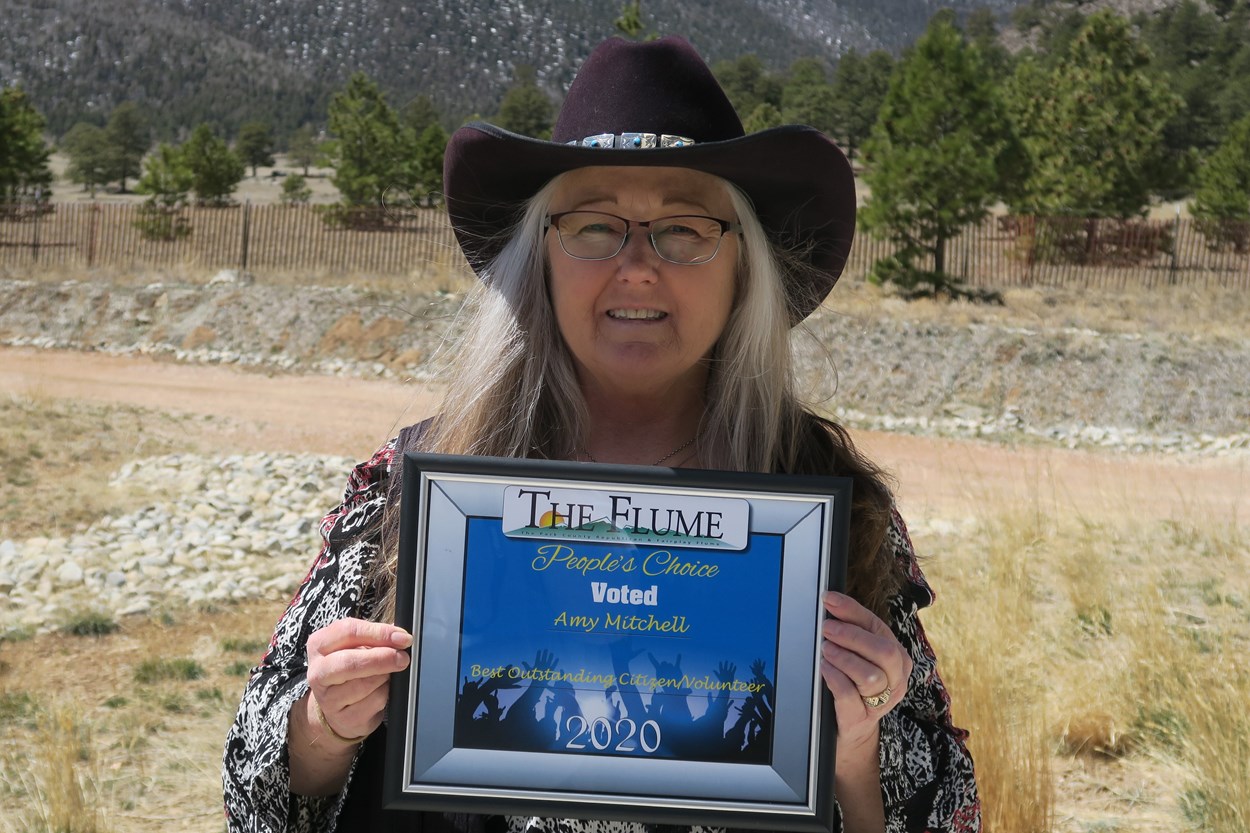 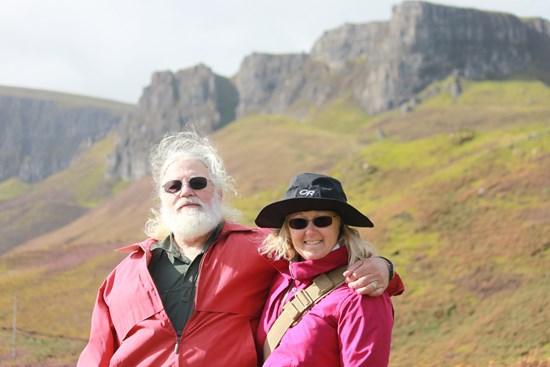 My husband Grady and I married 27 years ago. We live 10 miles west of Lake George at the base of Badger Mountain. I am a 5th generation Coloradoan, my family arrived in Colorado in 1862, before Colorado was a state. My great grandfather James William Dowd was elected as a State Representative to the Colorado 18th General Assembly. As merchants, they first settled in Idaho Springs, then lived near Leadville in a mining town Kokomo, and ultimately moved to Georgetown. I hold my Colorado roots dear and believe it is my duty to preserve Colorado’s and Park County’s mountain independence which affords citizens the freedom to determine how they choose to live. I believe that is why we all live in Park County. 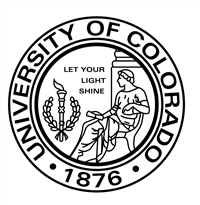 It took me 7 years to earn my college degree; I changed my major after three years. Was an art major at Colorado State University for three years.  After setting a goal to study art history in Vienna Austria to fulfill the advanced art history degree requirement and cutting a deal with my parents to pay 50% for the cost, I worked two jobs the summer between my freshman and sophomore year, earned 50% of the cost, and achieved my goal. Between sophomore and junior I year spent 6 weeks studying art history (baroque/rococo and Vienna session periods) and traveled for 1 month throughout Europe on an Euro-rail pass experiencing architecture and art throughout Europe.

After that awesome experience, I wanted a career where I was paid to travel.  I reset my goal, and transferred to the University of Colorado where they had just developed a business degree with a focus in international business. With another four years of hard work, working and going to school full time I graduated from The University of Colorado, Denver, in 1987 with a Bachelor of Science degree in Business/International Business. I learned how to prioritize to get things done. In my 33-year career, I worked in International Business for 13 years traveling throughout the world managing international product distribution networks and then in management as a vice president of sales and marketing in the dietary supplement industry for 8 years. In 2008 with hard work, I started a small business and have been self-employed running a successful small business ever since.  I have been scaling back my business to serve you full time as commissioner.

I currently serve as Chair/Secretary of ABE, the County Appointed Advisory Board for the Environment. As a volunteer, I offer my business experience to the county in reviewing permit applications, land use cases with regard to their impact on the environment; wildlife, air, water, land and minerals as well as other state and federal issues that may impact Park County’s environment. I believe in protecting private property rights and in protecting the environment. Both can be achieved with commonsense decision-making. I have served on ABE since March 2017. 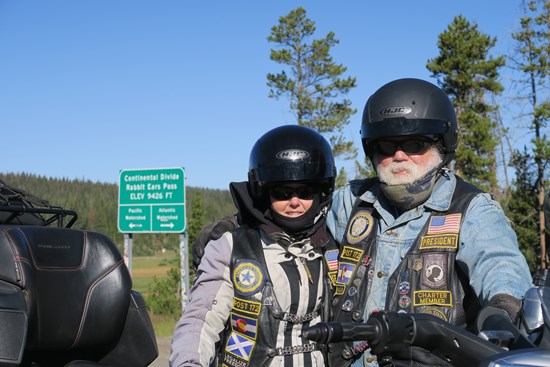 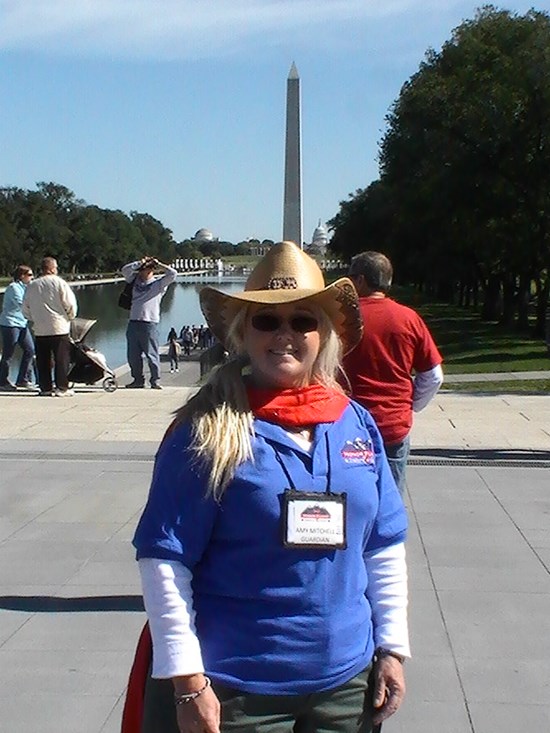 Was a founding board member in 2011 and secretary of Honor Flight of Southern Colorado along with my husband Grady, a Vietnam veteran, who served in the United States Marine Corps for 10 years until he was medically discharged due to a knee injury. We served for over three years on the board. We raised funds and conducted honor flights twice per year, honoring our World War II veterans by taking then to Washington DC for a 2-night, 3-day trip to visit their WWII War Memorial, Korea War Memorial, the Vietnam Memorial Wall, The United States Marine Corps War Memorial, The Air Force Memorial, Woman Veterans Museum, Navy Memorial, Lincoln Monument, Jefferson Monument  and the Navy Shipyard. I traveled as a Guardian twice per year at my own expense to take care of the veterans and ensure they had a fun and safe trip.

Video created when Chair of the TEA Party.

I am a life-long Republican and have volunteered my time to conservative activism since 2008. I have big city and small county experience. Attended Colorado Springs City Council meetings and El Paso County Commissioner meetings to advocate for conservative decision-making.

Served as founder and Chair of the El Paso County TEA (Taxed Enough Already) Party in Colorado Springs for over three years from 2008 – 2012; working to educate the public about the United States Constitution and the founding principles of freedom.

Was a Republican precinct committee person in Colorado Springs from 2010 to 2014 and Executive Committee Bonus Member for El Paso County Republicans (EPC GOP) in Colorado Springs. Served Park County as a Precinct committee person in 2016 and 2018 as well as past Republican Party Chair in 2018/2019 – having filled a vacancy. I am passionate about the principles of the Republican platform; less government, more freedom. I believe the Constitution and limited government are the foundation for making governing decisions. These principles absolutely relate at the county level.

Government, according to our founding, has limited responsibilities and should focus on public safety, infrastructure, and provide an organized structure that respects the rights of the citizens living in the county.

I strongly believe in limited government and fiscal responsibility. County government should focus on making government function within its financial means. Republicans put a tax increase question on the ballot the last two years and an expansion of the use of a tax on the ballot in 2018. Enough already. Government must respect you and your money. You exchange a part of your life for the dollars you earn and when the government asks for a tax increase, they are asking for an additional part of your life.  Fiscal responsibility means making hard choices with the county’s expenditures and prioritizing according to the function of Government.

I pledge to use my knowledge, skills, ability and work ethic to serve you as your District 1 Commissioner.  I will represent all corners of Park County and understand the unique challenges throughout the County. I will fight for limited government to protect your quality of life.