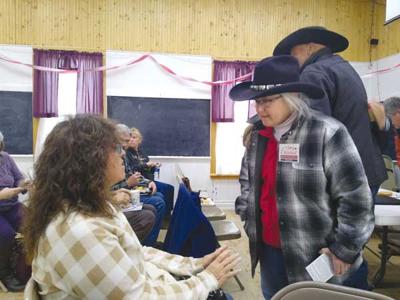 The county commissioners held a town hall-style meeting in Hartsel (also known as “Commish with a Dish meetings,” (only this time the dish was donuts) last Saturday. These meetings are times for updates from the county, questions from residents, and generally nice times to see your neighbors. Kandy Stoehr (left) chats with Amy Mitchell, county commissioner candidate. (Photo by Lori Bennett/The Flume)

To begin the meeting, commissioners discussed how important it is for residents to be counted in the census. A representative from the census encouraged anyone interested to apply for the part-time jobs with the U.S. Census. The job has flexible hours and pays 16 dollars an hour, time and a half on Sundays, and reimburses mileage at 57.5 cents a mile.

Why should citizens care about the census?

“Everything we get from the State is tied to how many people are counted in the census,” County Commissioner Richard Elsner said.

Commissioner Ray Douglas said, “Ten years ago the census missed by 60 percent  in the county; that means we lost 60 percent of 18,000.”

This means the county received only 40 percent of the money needed for the population.

Douglas explained that the county may receive approximately $2,300 per person.

Money that comes into the county based on census numbers is allocated to programs such as Health and Human Services, work centers, some Boys and Girls Club programs and more.

Park County, like other rural counties, may also have difficulty getting an accurate count of the population because the census does not mail surveys to P.O. boxes. If you do not have a physical address where you receive mail, you can call the U.S. Census Bureeau to be counted, or report your information online. Local libraries are able to help you access surveys via the internet if needed.

Commissioner Elsner said, “The county’s budget is ten million dollars from property taxes, six million from the State for roads and bridges, and 20 million for other programs which comes from census data.”

The commissioners continue to work with the public and current county regulations to revise LUR regulations with the goal of having more flexibility for property owners. The next hearing on this topic is March 19.

Examples of flexibility include increasing the number of outbuildings allowed, changing the definition of some buildings to be utility buildings (example: solar panel battery storage buildings or chicken coops).

Elsner said the commissioners are also making changes within current zoning regulations, and he said, “For example, agricultural land regulations state you cannot have a home on your land, we will allow this.”

A resident brought up scenarios of needing extra small buildings for root cellars, separate animal barns, and places for bees.

Elsner said, “one size does not fit all,” related to LURs.

A question was asked about why we have these rules. Elsner said there have been those in the past who abused the rules, such as the man with all the flags and the dug out bunker on his property.

Elsner said he views the issues on LURs as camping issues, living issues and storage issues.

One community member said there is a person living in a small shed near her and she has reported this, with photos, three times. Commissioner Mike Brazell said this is a resource issue. There are two code enforcers and last year they each handled 200 cases.

Elsner said sometimes rules are made up by highly populated counties, such as Douglas, Denver and Adams, and they may sound crazy. For example, the urban counties said if you want to compost a dead body in Park County, you are allowed to do this.

One resident said there will be an ambulance building next to the South Park Mercantile. The commissioners said they could not discuss this because there is an upcoming hearing on this.

They did say, public comment can also be sent via email and that becomes part of the record and the commissioners can read that.

One resident suggested a trash day with volunteers to help. Elsner said the county is still paying $300,000 a year for a landfill the county had in 1991.

Several audience members said the Road and Bridge department has done a great job this year.

There was significant discussion about the lack of money for the county for maintenance and repair of roads and bridges. This led to a discussion of the pros and cons of raising taxes through a tax on gasoline.

Commissioner Douglas said there are 1669 miles of roads in Park County, and for 1600 miles you could drive all the way to Joplin, Mo., which he recently did.

Elsner explained that the rural counties report and advocate for many of the same road and bridge concerns. However, decisions are made by a nine-member transportation committee, whose members are all appointed by the governor.

Per Elsner, the transportation committee member that Park County dealt with apparently got “cross-ways” with Governor Polis’s committee and was subsequently replaced.

There was a question about the ten dollar burn permit fee. Sheriff Tom McGraw, who was in attendance, said it goes to the fire district.

Commissioner Brazell said there is a volunteer group that goes into the forest on Sundays and looks for and puts out all campfires that were left by campers.

It would not be a traditional Hartsel meeting if buffalo were not mentioned. In this case, someone is closing the gate on a county road, resulting in both traffic and buffalo road blockages.

There were several candidates for commissioner present at the meeting, in addition to County Assessor Monica Jones.

Next stop: Alma. The town hall meeting then moved on to their afternoon meeting in Alma.